“I have applied. “ When I told a good friend that and paused before trying to explain Palmetto Tat Days, the response was, “Well, I know you apply yourself. You accomplish quite a bit each day!” I like to gather people around me who keep me grounded. Helps me not to take things quite so seriously. And I have applied to teach at Tat Days. I hope they like my class ideas and patterns enough to join in the fun! Our budget can’t take the $1000.00 hit what with flying from the West Coast to the East Coast.

With that done and sorted, I’ve been able to pick up the Heart pattern again. 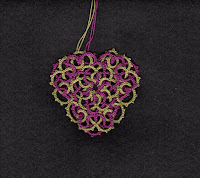 At several points in this pattern, we need to finish tatting a ring, but not to close it until we’ve switched to the other color and tatting 2 rings. That can result in plenty of confusion. I think I’ve got it now. I’m on to the final round and added beads of course!

I do hope things work out for Palmettos. What with the money I’ve been spending to make sure I live, I’ll need help. That addition to the week’s schedule was further testing at the Mammogram Center. $800.00 later, we have added data to teach the computer program it’s just scar tissue. Moral of the story: seek care and get the testing, but be a wise and informed consumer of what the Medical Industry offers.
Enough circular thinking! I am tatting rings instead! After deep breaths…….