Another version of Marilee’s pattern Dazzling Debut:
I like smaller earrings. The version I did last week didn’t look “finished” enough. So, I used size 40 thread instead of size 10, and added the two rounds from the necklace pattern. I like it better.

Today starts the busiest 4 days in most organists’ lives. I wish all a successful run!

The Tatting Class is working through updating more vintage patterns! To join in contact Georgia, to view our progress, visit the Homework bog: https://tattinghomework.wordpress.com/group-projects/anne-orr-star-book-of-tatting-designs/

Posted by picotsnkeys at 11:02 No comments:

Here’s a trial of the pendant that Marilee designed to go with the earrings. It's from the same book, Tatting with Beads Jewelry. I rather like it! 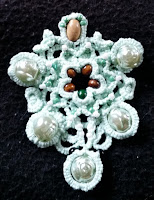 The large pale beads are difficult to photograph. They are acrylic 8mm beads that I cut from a necklace I’ve had for ages. I never wore it as it was too plastic looking. I thought framing them with thread would help, but dark thread just made them look even more plastic. Same color thread looks better, but I’ve realized I don’t like how shiny the beads look. It’s not a glass shiny, it’s a plastic shiny. Ah well. I can say I’ve got the pattern down now. I really do like it!

With Holy Week next week, I likely will not be posting. Sitting at the computer never is relaxing. I cannot risk activity that leaves my back and shoulders tense and sore. Back the following week with more fun!

Posted by picotsnkeys at 10:55 No comments:

I know I’m a year behind. That’s due to…….. “not important” stuff that turned out to be more “important” than this project. Just to prove that I’m sticking with it, here’s my solution for Round 8:

My logic: the center has 6 rings. Round 9 will have 24. I wanted to place beads to see if I could keep the eye seeing a wedge out from the center. More of a kaleidoscope effect than a drop in a bucket effect. I figure the next round will be several trials before I’m satisfied with a color choice. That may not happen until after the Fair.

Posted by picotsnkeys at 10:50 No comments:

The sun was dazzling on the Bay. I walked down to the “working wharf” this morning; a lot of activity there. A crew was mending nets in the parking area. Another crew was repairing damage under a section of wharf. Yet more people were unloading fish into hoppers shoveling ice as the stream of silver slid in. Several whale watching boats were heading out. Oh, and a storm was gathering off the North end of the Bay. All that fresh air and activity inspired me.

Yesterday, I completed a trial of an earring pattern by Marilee Rockley: 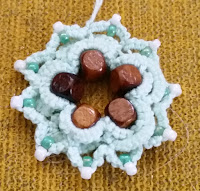 I’ve been trying and trying to wrap my brain around curled rings. I think this time, I finally got there. Although the first two I did with the ring and chain on one side of the earring, and the last three with things in the proper place.

I like the 3-D effect. Must visit this with other size thread and beads for a pair I can wear!

The weather report has been Simple for the week: RAIN!

We need the rain. Hopefully it will continue in the gentle way it came down yesterday. The plants are loving it. The house is warm and dry. The projects beckon. But, first I must get into the cupboards and tidy and file away!

First, I’ll share a picture of the edging I added to a stitching project. I succeeded in keeping it simple!

Posted by picotsnkeys at 08:37 No comments:

Short post today as I’m off to the Carmel Bach Festival Office to turn in my application for the Art Raffle. Last year I focused on Joy and Buxtehude. This year is Sonata time! I’ll hear in a few weeks if my little bit of thread will be displayed to tempt ticket buyers.

Posted by picotsnkeys at 08:18 No comments:

Next up: Little G Major

I had such great fun playing last Friday! My hands are still a bit sore from the normal chores and playing. I’ll be taking a break for a few days from the keyboards. That will give me enough time to source the proper replacement strings for the top keys on the harpsichord. I cheated and used the wire left from a lower broken string. It didn’t last long! I also need to see about replacing the plectra. Oh, and I’ve decided the Little G Major Bach is my next brush up.

On the tatting front, I’m making progress. Not much for pictures, so I’ll share a picture of a gull that was watching us watch the jellies and otters:

Posted by picotsnkeys at 08:58 No comments:

It’s raining today. I’m not complaining!! We need the rain. We’ve only measured half the “normal” rainfall for the season so far. We don’t get snow here in Monterey, so we depend on rain to replenish the ground water supply and fill the reservoirs. I doubt 6 inches will fall in the next 2 days, but it would be nice to get a couple inches.

Last weekend, I walked down to the bay to watch these:


My phone doesn’t do justice to the spectacle. These Jelly fishs were just spectacular. So easy to watch, and an otter swam right in between them and the dock! I wasn't fast enough to catch a picture of that, but this picture shows a bit the size difference between an otter and a  boat. I would like to find time this weekend to tour the new displays at the Aquarium. Perhaps I’ll find answers to questions from last weekend’s walk.

In the meantime, I’ve loaded beads for a trial through of Dazzling Debut by Marilee Rockley. It’s in Tatting with Beads Jewelry. I’ve wanted to try curled rings forever. Since I had most of the tatting projects well in hand, I dove right in.

One of those projects is the next round of Renulek’s Wiosna 2017 doily. I know, I know. It took me long enough to make a decision! I think I’ll like it. With all the other demands on my time, It’ll take me a month or so to make enough headway to show a picture.
One of those demands is on the organ bench. I’ll be playing at St. Paul’s Friday at Noon for those local to me. Bach, Franck, Walther and Saint-Saens. Not in that order. Or maybe. Come and find out!


Posted by picotsnkeys at 08:33 No comments: