I finally get to share what I’ve been working on. At least this gift: 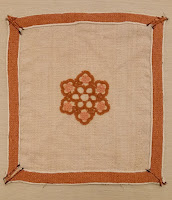 The challenge was to use the Pantone color that has been associated with your Secret Santa person. I used Candlewicking thread for the band and the tatting. Not ideal, but good colors. The darker color used in the snowflake was the target. As usual, there was a bit of learning curve with this project!

Tablet weaving is tough on my wrists, so I started and stopped a lot. That translates to mistakes. A lot. Didn’t hesitate to cut the band up and I found a nice fabric to compliment. Sewing it on didn’t work as well as I like, but I hope it will be used. It’s not meant to be an heirloom, but a frequently used item. I have a friend who dusts the house with her loom samples!

The thread was not as tightly plied as I usually tat with. That required extra attention with every DS. To get the colors in the proper place on the snowflake, the pattern ended up needing quite a few SLT. The advantage of using such a soft thread is that those knots end of disappearing into the piece. I plan to use this pattern quite a bit. It looks good in thread! I wonder how it will look in the metallic thread???

On to the next gift……