I like to test out my patterns several times. Having another tatter work through them also helps. Imagining how a pattern looks or tats up in other size thread, with or without beads, using needle just doesn’t always cut it. Getting things into thread usually does. I discovered on the third or fourth pass that I was losing track of where to join. Big time! A friend who knits gave me this idea: 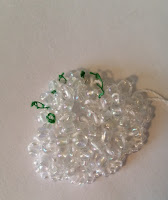 Marking points in the pattern for joins; much like marking darts when sewing or where to cut. It’s much easier to cut out these little loops of thread as you join than to find a vsp amongst the beads.


I hope to have a pair of earrings to wear soon. But alas, preparing for the next few days just may have to happen first. Speaking of testing…. I should test that recipe for mulled cider. (mmmmm!)
Posted by picotsnkeys at 05:55